THE ASCENT OF MONEY

the stars are those
we have forgotten
both living and dead,
floating in clustered constellations
not labouring in rows-
with hair growing grey
and teeth going rotten
singing songs, God’s godless pray.
harvesting crops.
chants drowned in clocks
of tobacco and cotton,
the peasants and slaves of civilised nations
duped by liberty
in recent history-
dug out canals, made railways and roads
out of tarmac to tread-
into factories
like tribal junkies
hooked on cheap gin and beer instead
of joining the cholera’s watery dead-
ten to a room in a slum and led-
like human batteries,
sleeping without moonlight
on sarsen stones,
or druid voices in their homes-
where thoughts have no dreams or flight,
just sleep, recharge, get bled.
you have to be poor,
to think utopia
can be something real-
not to exploit or steal
that ambrosia aura of women and children and men
for the spoken wages of despair-
that suck you in,
glad but grim
when time’s clock punches that card by the door
and mass myopia
conditions all to labour, keyboard and pen
for food and shelter with a roof and fourth wall
shanty made out of cardboard, wood and tin
in sunny Sao Paolo, where the samba rain leaks in
while orphaned children beg and play
eating the forage of capitalist waste
dodging death squads night and day
imitating Socrates at football to hope to taste
what’s inside the cold, glistening towers
casting invisible powers
behind the smoked glass and soldiers of stone
leaving blood and bleached bone
from over there-
where the ascent of money doesn’t care
about it all
because its infinity is small.

Strider Marcus Jones – is a poet, law graduate and ex civil servant from Salford, England with proud Celtic roots in Ireland and Wales. A member of The Poetry Society, his five published books of poetry https://stridermarcusjonespoetry.wordpress.com/ reveal a maverick, moving between forests, mountains, cities and coasts playing his saxophone and clarinet in warm solitude.

my old socks
sheath the feet
that fill my boots
to walk on land.

READ SELECTED POEMS FROM MY BOOKS 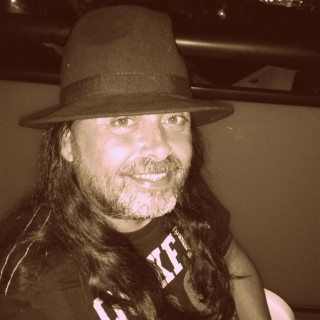 Strider Marcus Jones – is a poet, law graduate and ex civil servant from Salford/Hinckley, England with proud Celtic roots in Ireland and Wales. A member of The Poetry Society, his five published books of poetry are modern, traditional, mythical, sometimes erotic, surreal and metaphysical http//www.lulu.com/spotlight/stridermarcusjones1. He is a maverick, moving between forests, mountains and cities, playing his saxophone and clarinet in warm solitude. His poetry has been published in the USA, Canada, England, Ireland, Wales, France, Spain and Switzerland in numerous publications including mgv2 Publishing Anthology:And Agamemnon Dead; Deep Water Literary Journal; The Huffington Post USA; The Stray Branch Literary Magazine; Crack The Spine Literary Magazine; A New Ulster/Anu; Outburst Poetry Magazine; The Galway Review; The Honest Ulsterman Magazine; The Lonely Crowd Magazine; Section8Magazine; Danse Macabre Literary Magazine; The Lampeter Review; Ygdrasil, A Journal of the Poetic Arts; Don't Be Afraid: Anthology To Seamus Heaney. http://www.lulu.com/spotlight/stridermarcusjones1 . http://www.amazon.co.uk/s/ref=ntt_athr_dp_sr_1?_encoding=UTF8&field-author=Strider%20Marcus%20Jones&search-alias=books-uk My poetry blogs are: https://stridermarcusjonespoetry.wordpress.com/ http://poetrybystridermarcusjones.blogspot.co.uk/ Location: Paris, France For his published poetry books: Aspects Of Love; Inside Out; Mavericks; Wooded Windows and Pomegranate Flesh see: http://www.lulu.com/spotlight/strider... http://www.amazon.co.uk/s/ref=nb_sb_s... http://www.amazon.com/s/ref=nb_sb_ss_... Read poems from his books with reviews and comments on http://www.wattpad.com/user/striderma. ..Join him on Facebook https://www.facebook.com/stridermarcu... His poetry blogs are: http://http://poetrybystridermarcusjo... http://stridermarcusjonespoetry.wordp... Join him on Facebook https://www.facebook.com/stridermarcu... http://www.huffingtonpost.com/strider... Read this brilliant review of one of the poems from WOOODED WINDOWS http://dagdapublishing.co.uk/2014/09/... And so you sit and stay since you’ve been com­ing to the run­ning of my day, the in between of real and dream is drawn in what we say now i lie sun­ning in the sum­mer of your way. it shapes the shade around me, foun­da­tions where you found me, emp­ty­ing that grey obelisk of thought stood in the room no more scar­ring the bloom– and so, you sit and stay motions mend­ing me, feet turn­ing wheel, hands shap­ing clay. © Strider Mar­cus Jones **** Today’s fea­tured poem comes from Strider Mar­cus Jones. A piece wrought with intri­cate sym­bol­ism, “And So You Sit And Stay” deals with an ambigu­ous love and the capac­ity under­stand­ing and com­pan­ion­ship have for heal­ing, both men­tally and phys­i­cally. The sea­sons and their cor­re­spond­ing wildlife are utilised in a con­tin­u­ous metaphor through­out the poem, to the extent that much like the dis­solved bar­rier “in between [the] real and dream” the repaired flower that is “no more scar­ring the bloom-​​” can be inter­preted as the narrator’s inter­nal soul and mended emo­tions, a view­point that is given fur­ther depth by the narrator’s “sun­ning in the sum­mer of your way” an abstract, though beatific grat­i­tude to the unnamed subject’s kind­ness. Much of the imagery in this piece is organic and wild, except that which deals with the narrator’s sit­u­a­tion before the unnamed sub­ject came upon them: “emp­ty­ing that grey obelisk of thought stood in the room” Again there is a wil­ful com­bi­na­tion of the phys­i­cal and men­tal planes, though here it is used to demon­strate the bleak­ness of the narrator’s lonely plight — an imper­sonal, tow­er­ing civic con­struct that f (less)

The official blog-site for David A. Estringel, author of Indelible Fingerprints.

An Echo of the Howl

Flight of the dragonfly

a journal of contemporary haiku

The place where the horizen meets up with the sun

a place for the discussion of dreams, the analyses of fantasies, the prodding of popular larks

A home for free-verse/experimental/off-beat poetry.